A sudden and intense controversy has arisen in Kerala on the issue of relative number of children born to different communities there. A recently retired chief of Kerala police has stated in an interview that of all children born in the state in 2015, as many as 42 percent are Muslim, even though the share of Muslims in the total population as counted in Census 2011 is only 26.6 percent. The former police chief has been accused of misrepresenting facts and fomenting communal discord.

But the detailed data is even more startling. Vital statistics for the last several years show that the share of Muslims in the total live births recorded in the state has been rising rapidly at least since 2008. In that year, of all live births in the state, 36.3 percent belonged to Muslim families. That proportion has been steadily rising and has reached 41.5 percent in 2015. Meanwhile, the share of Hindu families in the total live births has declined from 45.0 to 42.9 percent and of Christian families from 17.6 to 15.5 percent.

Some commentators have argued that this rise in the Muslim share may be because of improved registration of births among them. That only means that the number of 41.45 percent of the live births in 2015 being Muslim is more reliable than the lower figure of 2008. But the figures of both 2015 and 2008 are very large in proportion to their share of only 26.56 percent in the total population.

The phenomenon of higher and rising share of Muslims in the live births in Kerala finds further support in the higher and rising share of Muslims in the child (0-6 yr) population of the state as counted in Census 2011 and 2001. In 2011, 36.74 percent of the children in Kerala are Muslim; their share in 2001 was 31.08 percent. Census 2011 also counts 14.4 children among every hundred Muslims as compared to only 8.93 among every hundred Hindus and 8.91 among every hundred Christians. The gap between the number of children per hundred of the population between Muslims and Hindus in 2011 is of 5.45 children; that gap was of 4.19 children in 2001. Thus all parameters seem to confirm the trend of a large and rising fertility and growth gap between Muslims and others.

Imbalance in the number of registered live births

Annual Vital Statistics Reports of Kerala give breakup of live births according to religion community from at least 2008 onwards. In the Table above, we have compiled this data for eight years from 2008 to 2015.

Number of live births has begun to decline 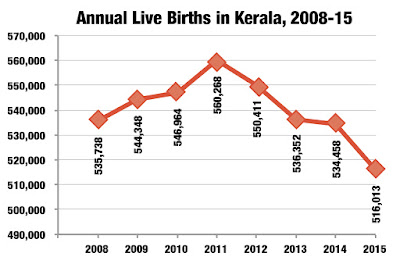 The Table above and the graph on the right indicate that the total number of live births in Kerala has begun to decline after 2011. The number rose from 5.36 lakh in 2008 to 5.60 lakh in 2011 and has declined rapidly since then to reach 5.16 lakh in 2015. This is a graphic representation of the fact that Kerala, like many other states of India, is approaching the phase of demographic stabilization and decline. But the decline seems to be confined to Hindus and Christians alone. Number of live births among Hindus and Christians has been falling for several years, but that of Muslims has recorded a slight decline only in 2015, the last year for which the figures are available. This has led to a drastic change in the share of different communities in the total number of live births in the state. 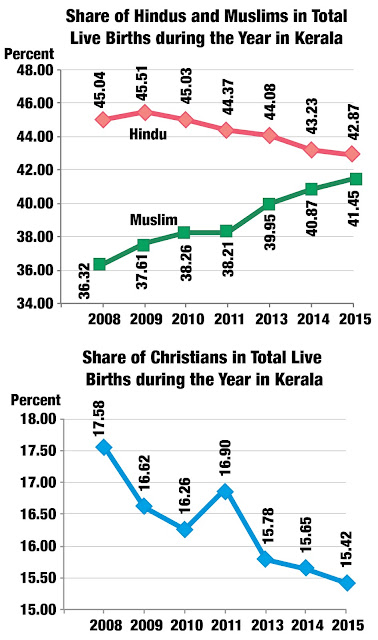 Rapidly rising share of Muslims in live births is not a statistical illusion
It has been suggested by some commentators that the rapid rise in the share of Muslims in total live births that we have noticed above may be because of more complete registration of births among them. This seems unlikely because in Kerala an overwhelming majority of deliveries take place in institutional settings or at the hands of trained medical personnel. In 2008, out of 5.36 lakh live births, 4.87 lakh happened in institutional settings and another 12 thousand were assisted by physicians or trained paramedics. When institutional and professionally assisted deliveries are so widely prevalent, it is unlikely that many births would escape formal oversight. But even if it were true that Muslim births were not being fully captured in the registration process earlier, then it means that the current numbers reflect the reality of the situation better. That reality indicates a very high share of live births among Muslims as compared to their share in the population. The fact of higher and increasing share of children among Muslims is recorded in the Census numbers also, which do not depend upon completeness or otherwise of registration of births.

Imbalance in the number of children counted in the Census

Census 2011 counts 5.5 extra children per hundred of population among Muslims

Number of children per hundred of the population of Muslims is significantly above that of Hindus in all districts. In Kannur and Kasaragod, the difference is of more than 6 children, in Kozhikode and Palakkad of more than 5 children and in Malappuram, Thrissur, Ernakulam and Thiruvananthapuram of more than 4 children. In general, the difference seems to get narrower as we move from the north to south. Share of Muslims in the total population of the districts of also declines from north to south.

Share of Muslims among children has risen sharply between 2001 and 2011
It is even more interesting to note that the share of Muslims in the total 0-6 population of the state has increased by 5.7 percentage points between 2001 and 2011. In 2001, 31.08 percent of the children counted in Kerala were Muslim, that share has risen to 36.74 percent in 2011. Their share in the total population during this decade has increased more modestly from 24.70 to 26.56 percent. Rise in the share of Muslims in total live births during 2008-15 that we have noticed above on the basis of birth registration data is consistent with the rise in their share in the total child (0-6yr) population of the state during the last decade. Therefore, the striking rise in the Muslim share in live births in recent times cannot be attributed entirely to the alleged vagaries of the registration process.

The data strongly suggests that the imbalance in the growth of Muslims and others in the state is likely to keep rising sharply rather than subsiding in the foreseeable future.

Census 2011 has recorded similar and even larger gap in the share of Muslim in the child (0-6yr) population in several states and districts of India. We shall present that data in a subsequent note. But the case of Kerala is especially striking.

Vital statistics data for Kerala is among the most reliable in the country. Given so much of good reliable data, why don’t our demographers apply their standard analytical tools to predict the likely trends of the changing religious demography of Kerala? It would be a very interesting academic research problem to pursue and it may also help India in evolving an appropriate policy for maintaining demographic equilibrium among various religious communities. The kind of imbalance that is developing in Kerala is difficult to sustain for any reasonably functional polity.