Tentative restoration of the balance, the case of Bihar

As we have said earlier there are two major stories emerging from the religion data of Census 2011. The first is the usual story of Muslims considerably improving their share in the population of India, and both Muslims and Christians recording extraordinary growth in specific regions of the country, mostly where they already have significantly high presence. But there is also a second story in the religion data of Census 2011 and it is about an unusual, though yet nascent, recovery of the share of Hindus in parts of India.

The main religious demographic issue in the country still remains the excessively high growth of Muslims and Christians in various regions. If one were to point out the two most significant aspects of the religion data of the latest Census, besides the aggregate increase in the share of Muslims, these shall have to be the unexpected and extraordinary rise of the Muslim share in Assam and the long anticipated, yet unstoppable, expansion of Christianity into Arunachal Pradesh. But, before looking at these issues of obvious national concern, we look at the newer story of the Hindu recovery; and we begin with Bihar, a State that has a fairly high Muslim population, shares borders with Nepal and Bangladesh and has seen a robust rise in the Muslim share for several decades. During 2001-11, Hindus have recorded a higher rate of growth than the Muslims in 15 of the 38 districts and 200 of the 534 sub-districts of the State. This post narrates the story of this tentative restoration of the demographic balance among different communities in Bihar.


Slowing down of the rise in Muslim Share
Muslims have a considerable share of 16.87 percent in the population of Bihar in 2011; but it has increased only by 0.33 percentage points over their share in 2001. During 1991-2001, they registered a much more substantial rise of 0.83 percentage points. The increase was somewhat less during 1981-91 and 1971-81; but in the two decades before that the Muslim share in the State had risen sharply by more than 1 percentage points every decade. The 2011 data thus indicates a sharp slowing down of the process of rise in the Muslim share, which has been going on since 1951 and in the course of which the Muslims have added 4.53 percentage points to their proportion in the population. The process has of course not been reversed, but the slowing down is certainly more significant than what was seen earlier for a couple of decades from 1971 to 1991.

Narrowing of the Growth Gap between Muslims and IR
To comprehend the extent of this phenomenon, it is instructive to look at the growth rates recorded by Muslims and Indian Religionists (IR, comprising the total population minus Muslims and Christians) in the six decades since Independence. As seen in the Table here, the Normalized Gap between the growth rate (GR) of Muslims and IR (Muslim GR minus GR of IR divided by GR of IR) was very high in 1951-61 and 1961-71. It declined to around 24 and 26 percent in the next two decades, and rose again to about 30 percent in 1991-2001. In the current decade, the Gap in GR between Muslims and Indian Religionists has narrowed to below 13 percent. The decadal Muslim growth has declined sharply from the all time high of 35.5 percent of the previous decade (1991-2001) to about 28 percent in this decade, while the IR rate has declined more moderately from 27.3 to 24.8 percent. 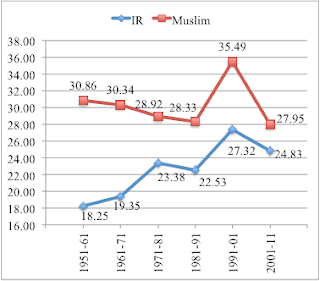 This narrowing of the wide gap between the growth rate of Muslims and Indian Religionists can also be seen in the graph here. In this graph, it is clear that though there was some bridging of the gap during 1971-1991, yet it widened again and substantial coming together of the growth rates of the two communities has happened only in this decade. The difference between the average growth rate of Muslims and IRs in the State is now so small that it is natural to expect the Muslim growth to have been slower than others in at least some of the districts. We see below that in as many as 15 of the 38 districts of the State, Muslim share in the population has actually declined, though marginally in most cases, between 2001 and 2011. In all these districts, the Hindus have recorded a higher rate of growth than the Muslims. 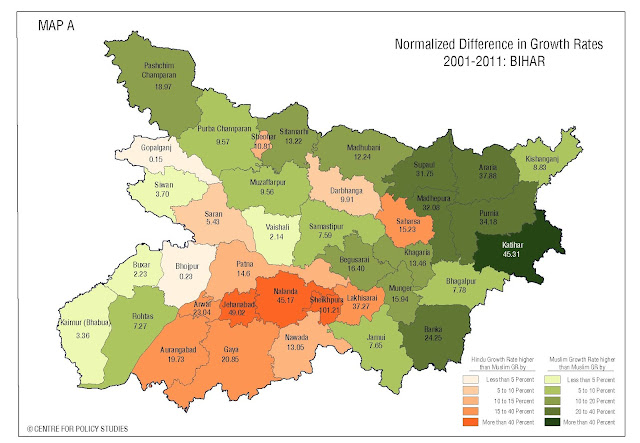 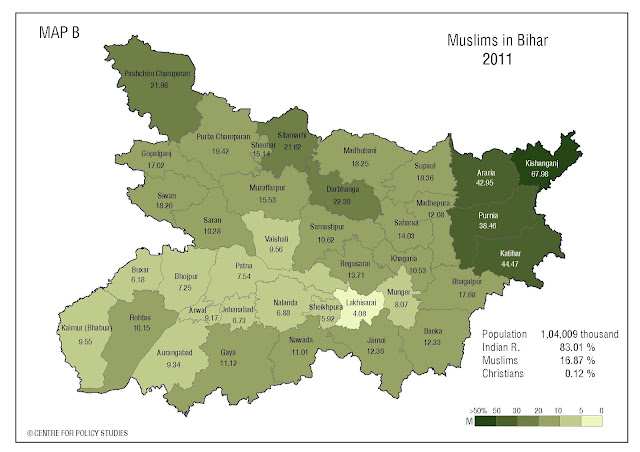 As seen in the Map, the growth advantage in favour of Muslims in the remaining Kaimur and Buxar components of undivided Shahbad and Siwan component of undivided Saran is only marginal. In this whole contiguous western region, it is only in Rohtas component of Shahbad and Jamui of Munger that Muslims growth rate is above the Hindus by more than 5 percent. Munger, Begusarai and Khagaria of undivided Munger are outside and towards the east of this region of higher Hindu growth.

The remaining 3 districts, where Hindus have grown at a rate faster than the Muslims are Sheohar component of undivided Muzaffarpur; Darbhanga component of undivided Darbhanga and Saharasa of undivided Bhagalpur-Saharasa region. In this whole region, Muslim growth in the past has been much higher than the Hindus. Incidentally, the difference between the Muslim and Hindu growth during 2001-2011 is of just about 2 percent in favour of Muslims in Vaishali component of Muzaffarur. Increase in the share of Muslims in this component was not very high in 1991-2001 also.

Among these fifteen, the phenomenon of higher growth of Hindus as compared to the Muslims has been the most marked in Jehanabad, Nalanda and Sheikhpura; in Sheikhpura, the share of Hindus has increased by 1 percentage point. It must be remarked that the Hindu share has not necessarily increased in all the 15 districts that have recorded a higher growth than that of Muslims; in some of these, the Hindu share has slightly declined, but the decline is less than that suffered by the Muslims; in these cases, there has been often a large increase in the share of the census category of RNS.

From the above analysis, and the Maps, it is clear that in a very large part of Bihar, comprising nearly the entire western half of the State and also certain districts in the eastern half, the trend of Muslim growth being almost always higher than that of Hindus has been largely reversed. This phenomenon of Hindu growth catching up and surpassing Muslims is widespread, and cannot to be taken to be a mere statistical coincidence.