Declining share of Jains in the population of India
Like the Sikhs, Jains have registered rather low growth during 2001-11; their decadal growth rate of 5.37 percent is even lower than that of Sikhs who have grown at a relatively robust 8.42 percent. Unlike the Sikhs, however, the lower growth of Jains seems understandable in view of their very high urban ratios and very high levels of both male and female literacy. What is difficult to understand in their case are the sudden and sharp changes in their growth since 1981; their rate of growth declined sharply to just 5.0 percent in 1981-91, it rose equally sharply to 26.0 percent in 1991-2001 and has declined again to 5.37 percent in 2001-11. These sharp changes are probably related to other than demographic causes. But, Jains seem to have entered a phase of low growth after 1981.

Jains are a sub-group within the Hindu trading Castes; their low growth raises the question whether the trading Castes as a whole have begun to grow at a much lower level than others. Could it be happening with other literate Castes like the Brahmins, etc., also? The Census does not collect the data to answer such questions.

The Census was not conducted in Assam in 1981 and J&K in 1991. If we correct for this the rate of growth of Hindus rises slowly up to 1981 and smoothly declines after that, as we have shown in our eighth post on this issue. If we apply the same correction to Jains, their growth of 1971-81 becomes somewhat bigger and that of 1981-1991 somewhat smaller, thus making the changes in their growth even more abrupt. This sudden decline in the growth rate of Jains in 1981-1991, sharp rise in 1991-2001 and sharp decline again in 2001-11, is difficult to understand or explain. But, they certainly seem to have entered a phase of decline after 1981. In the 3 decades since 1981, the proportion of Jains in the population of India has declined by more than 20 percent, from 0.47 percent in 1981 to 0.37 percent in 2011.

To understand the rise and decline in the growth of Jains during the last two decades, it is instructive to begin by looking at the distribution of Jains across the country. In the Table below, we have compiled the number, proportion and growth rates of Jains in 1991, 2001 and 2011 for all the States where there is a significant population of Jains. The 16 States listed here account for all but about 40 thousand Jains in the country. We also show the district-wise numbers of Jains counted in 2011 in Map X-A. 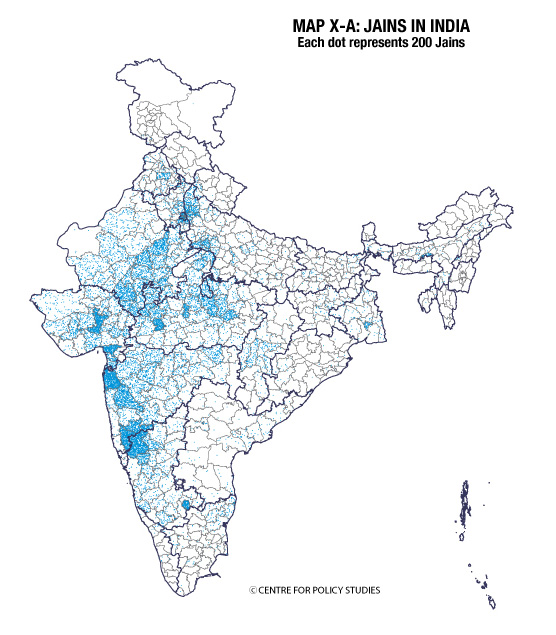 Jains are concentrated in the western India
Jains in India are particularly concentrated in the western India. Maharashtra, Rajasthan, Gujarat and Karnataka account for about 30.5 lakhs out of the total 44.5 lakh Jains counted in 2011. Within Karnataka, a majority of the Jains are in the western districts; of 4.40 lakh Jains in the State, 1.78 lakh are in Belgaum district and another 60 thousand in the adjoining Bagalkot and Dharwar districts. Apart from these northwestern districts, there is a concentration of Jains in Bangalore.

Jains have a significant presence in Delhi and adjoining States
Jains form about 1 percent of the population of Delhi and they have a share of about 0.2 percent in Haryana and Punjab and about 0.1 percent in Uttar Pradesh. These four States together accommodate about 4.7 lakh Jains. In Uttar Pradesh, Jains are particularly concentrated in the western districts adjoining Haryana and Madhya Pradesh. There are also more than 9 thousand Jains in Uttarakhand; most of them are located in Dehradun and Hardwar districts.

Jains in other States
Outside these western, central and northern States, Jains have a remarkable presence only in Tamil Nadu, where they form 0.12 percent of the population. There are also significant numbers of Jains in West Bengal, Andhra Pradesh (including Telangana), Assam, Bihar, Jharkhand and Odisha. Map X-A shows pockets of Jain concentration in all these States.

As seen in Table above, the all India pattern of Jains recording a spurt in growth in 1991-2001 is repeated in almost every State except Gujarat. The spurt was particularly sharp in the northern States of Delhi, Haryana and Punjab. In Punjab, Jains have grown faster than the total population in 2001-11 also.  In the Table here we have compiled growth rates of Jains since 1961-71 for all States with a significant Jain population and presence. In all of these States, except Gujarat, the decadal growth of Jains declined substantially in 1981-91. This was followed by a very significant rise in the growth rate during the next decade of 1991-2001. And then in 2001-11, there is an equally sharp decline, with the growth rates turning negative in Haryana and Rajasthan. In both these States, the growth rate of Jains was negative even in 1981-91; in Haryana, that negative growth was followed by extraordinary growth of 62 percent in the next decade.

The sudden rise of growth in most States, except Gujarat, in 1991-2001, could be a demographic quirk, but it is more likely to be the result of some campaign to get more persons counted as Jains. Growth rates are unlikely to rise so sharply based on only demographic parameters. Similarly, the rather low growth of 1981-91 may also be partly related to other than demographic causes. But overall indications are that the Jain community has settled into a low growth period, which has set in from 1981-91.

The growth rate of Jains has declined even though their gender ratio is somewhat higher than the Hindus and of the total population. As seen in the Table here, at the all India average level, Jains have 954 females per thousand males compared to 939 among Hindus. The ratio for Jains is higher than Hindus in all States where there is a significant Jain presence, except Chhattisgarh and Karnataka. The gap between the gender ratios for Jains and Hindus is among the highest in Gujarat, where their growth has also been the high. But the gap between is fairly high in Maharashtra and Delhi also, where their growth has been moderate, though higher than their national average. The growth rates thus do not seem to have any direct relationship with the gender ratios. This is also not expected; demographic phenomena are complex and cannot be determined by any single parameter.

From the community-wise data on literacy and other socio-economic and demographic parameters that has been released by the Census of India last week, it seems that the Jains have very high literacy in general and particularly high literacy among women. In the Table below we have compiled data for the literacy, child ratio and work participations rates of men and women for Jains and Hindus for both 2001 and 2011. Before 2001, the Census was not publishing community-wise data on these parameters.

The data for Jains seems to strongly indicate that higher literacy among women translates into lower number of children. We have seen this phenomenon among Sikhs also, though not as strongly as among the Jains. But as we have said earlier, female literacy alone does not determine the fertility of a population.

And work participation rate of Jain women is low

Along with high female literacy and low number of children in the population, Jains also have very low rates of work participation for women. In 2001, only 9.2 percent of Jain women were working compared to 27.5 percent of Hindu women; in 2011, work participation rate of Jain women has somewhat improved to reach 12.3 percent, while the rate for Hindu women has remained nearly unchanged.

Another significant feature of the Jain community is their very high level of urbanisation. Of 44.5 lakh Jains counted in 2011, as many as 35.5 lakhs are urban. This amounts to an urban ratio of 79.7 percent, compared to 29.2 percent of Hindus and 31.1 percent for the total population. The urban ratio of Jains is high in all major States. The rural Jains are also often located in larger locations that act as trading centres for the area around them.

The lower number of children among Jains may also be partly related to their higher level of urbanisation. On the average, there are 11.45 children per 100 of population in the urban areas compared to 14.55 in the rural areas. But the number of children among Jains at 8.91 per hundred is much lower than the national urban average also. Incidentally, urban Jains have even fewer children; the ratio for them is only 8.64 per 100 of the urban population.

From the data compiled above it can be surmised that:

1.   The rate of growth of Jains has begun to decline after 1981. The spurt in growth witnessed in 1991-2001 was abnormal and was perhaps related to other than demographic causes; such causes may have partly influenced the sudden decline in their growth during 1981-91 also. Their low growth of 5.4 percent during 2001-11 is in consonance with their growth of just 5.1 percent during 1981-91.
2.      This pattern of lowered growth after 1981, with an abnormal spurt in 1991-2001, is seen in almost all major States with a sizable Jain presence, except Gujarat. In Gujarat, their rate of growth became rather low in 1971-81 and has been rising since then.
3.      The declining growth of Jains is probably related to their very high level of urbanization and very high literacy among Jain women. In this sense, the decline in their growth is not as inexpiable as that of Sikhs.
4.   In any case, Jains as a religious community are quite different from the Sikhs, because of two reasons. One, though Jains are concentrated largely in the western part of India, they have significant presence in central and northern India also, and their share in the population everywhere is rather small; thus, unlike the Sikhs, they have no particular “home” State. Second, Jains are not significantly distinct from the Hindu society in terms of dress and manners, except for their greater emphasis on Ahimsa, which makes them more pious and disciplined persons in the eyes of the Hindus.
5.     The lower growth of Jains, however, gives rise to an important issue for the Hindu society. Jains belong almost exclusively to the trading Castes; notwithstanding their membership of the Jain religious community, they are not dissimilar from the Hindus trading Castes in their social and cultural manners. Therefore, there is reason to believe that the high level of urbanisation, high female literacy and low demographic growth observed among the Jains may be attributes of the trading Castes in general, and not of Jains alone. And, these attributes may be shared by other literate Caste groups like the Brahmins and perhaps also Rajputs. If that is the case, then the rather low growth of Jains may be an indicator of a sharp change in the relative demographic position of different Caste groups in the Hindu society. Such a change can lead to important sociological and political consequences.
6.     Unfortunately, since the Census does not give Caste-wise data, it is not easy to test this surmise. By giving separate data for Jains as a religious community, the Census is probably offering us data on a large sample of trading Castes; otherwise, the Census gives no Caste data, except for the Scheduled Castes and Scheduled Tribes. The issue of changing Caste composition of Hindu society, however, is important enough to consider collecting the data on Caste in the future Censuses.
7.    Meanwhile, we should undertake a large-scale survey to record the relative fertility of different Caste groups along with their various socio-economic indicators. The rather low growth of Jains underlines the urgency of such a survey.
at 12:55