The ORPs add to the religious demographic contention in Jharkhand

In the previous post, we have noted that the decline in the share of Indian Religionists (IRs), and the corresponding rise of Muslims and Christians, has stalled in all regions of Jharkhand, except in Santhal Pargana, though the rise of the latter in this region is large enough to amount to a considerable decline in the share of IR in the population of the State as a whole. Indian Religionists in Jharkhand, however, include considerable proportion of persons counted in the category of Other Religious Persuasions (ORPs), and it is important to know about the changes in the relative share of Hindus, ORPs and others falling within the larger category of IRs. In addition, the changes in the proportion of Hindus and ORPs on the one hand and of Muslims and Christians on the other have been much sharper in many of the individual districts of the State than in the larger region in which they are situated; these changes at the district level give a glimpse of the intensity of the contention for demographic space among different communities that seems to be going on in much of India. We discuss these two issues in this post.


Hindus, ORPs and Others in Jharkhand

Unlike in most other States, there is a considerable number of ORPs in Jharkhand. In 2011, in the total population of 33 million, 4.2 million are counted in this category; they form more than half of the 7.9 million ORPs counted in the country. In Jharkhand, they form the third largest group after the Hindus and Muslims, with a share of 12.84 percent in the population. Taking into account changes in their numbers and share is, therefore, important while looking at the religious demography of Jharkhand and its districts. Incidentally, ORPs of Jharkhand are mainly the followers of Sarna Dharma, a religious practice popular among the Scheduled Tribes. The detailed religious affiliation of ORPs in the 2011 Census is not yet available. Of 35.1 lakh ORPs counted in 2001, 34.5 lakh were Sarnas; and 31.4 lakh of the Sarnas were from the Scheduled Tribes.

Distribution of ORPs in Jharkhand
ORPs in the State are concentrated mainly in the Ranchi and Singhbhum regions of the State. Of the total of about 42 lakh ORPs in the State, 34 lakhs are in these two regions. And within these regions, they are particularly concentrated in certain districts and sub-districts, as seen in the Map VI-A below. Outside these two regions, there is significant presence of the ORPs only in Latehar, where their proportion has increased considerably during 2001-11, and to a lesser extent in Pakur. In all other districts, their share in the population is less than 10 percent and in many it is negligibly small. 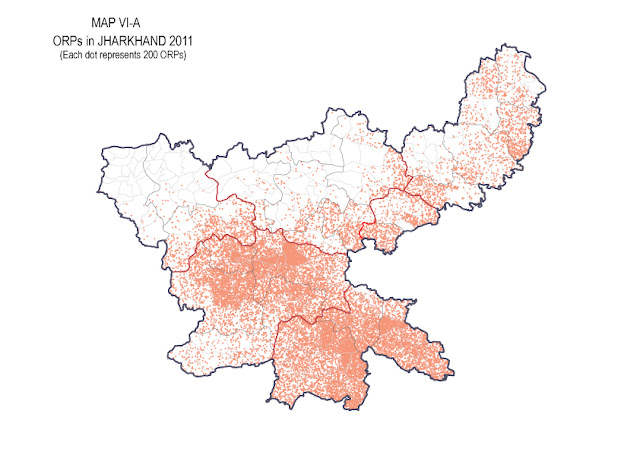 Decline in the proportion of ORPs in Jharkhand
One of the more significant aspects of Census 2011 is the slight, but noticeable, decline in the share of ORPs in the population, as seen in the Table above, their proportion has gone down from 13.04 percent in 2001 to 12.84 percent in 2011. This is significant, because the number of ORPs in the previous decade of 1991-2001 had multiplied by two and a half times, from 14.4 to 35 lakhs. During the last several decades, there has been much campaigning among the Scheduled Tribes to get them counted outside the larger umbrella of Hinduism, which of course has always accommodated the diverse religious beliefs and practices of different groups. This time also, there was a vociferous campaign in this direction carried out among the Janjatis across India during the preparatory phase of Census 2011. The campaign has not succeeded, at least in Jharkhand. This is also probably a consequence of the nascent Hindu resurgence that we have been noticing in the religious demographic numbers of 2011. We shall discuss the countrywide changes in the proportion of ORPs in the following post.

Decline of Sikhs and Jains
Another remarkable aspect of the data compiled in the Table above is the decline in the absolute number, not merely the share, of Sikhs and Jains. Both these communities have registered a negative rate of growth. The number of Sikhs has declined from 83 thousand in 2001 to 71 thousand in 2011; that of Jains has declined from 16 to about 15 thousand. The number of Buddhists has increased from about 6 to 9 thousand. The change in the numbers counted as RNS (Religions Not Stated) is also remarkable; this population has increased from 25 to 68 thousand. Such large changes in the population of Sikhs, Jains and RNS seem to have happened across the country. We shall discuss these in due course. We continue the discussion below, of district-wise changes in the religious demography, especially from the perspective of the ORPs.

Changes across different districts of Jharkhand

Changes in the share of ORPs, and other communities, have not been uniform across the districts. In several districts, the share of one community or the other has increased considerably and in several others, there has been a sharp decline. Below, we consider the districts that have undergone the most significant changes:

As seen in the Table above, the share of ORPs has declined in five of the six districts of this region. The loss of ORPs in four of these districts, Deogarh, Godda, Sahibganj and Pakur, has been almost entirely towards the gain of Muslims and Christians, though in Godda, there has been a slight increase in the share of Hindus also.
Of these four districts, the largest change has occurred in Pakur. Here, the share of ORPs has declined from 15.77 percent in 2001 to 9.86 percent in 2011. The share of Christians and Muslims has correspondingly increased by 2.57 and 3.51 percentage points, respectively. The share of Hindus has declined only slightly from 45.70 to 45.55 percent.

The changes that have happened in Dumka and Jamtara districts can be seen happening even more sharply at the sub-district level; for example, in Dumka taluk, the number of ORPs has declined from around 17.3 thousand in 2001 to 7.4 thousand in 2011, while in Jamtara taluk it has gone up from 18.8 to 31.0 thousand.

Thus, Muslims and Christians have improved their share in every district of the Santhal Pargana region at the cost of either the Hindus or the ORPs, and there seems to have been much interchange between the latter two. This gives an indication of the intensity of contention for demographic space that is happening at the ground level in the country.

The sharp decline in the share of ORPs in Saraikela-Kharsawan seems largely because of the number of ORPs declining from about 59 thousand to 27 thousand in the three taluks of Ichagarh, Nimdi and Kukru. The number of Hindus in these has increased from 1.17 to 1.79 lakh. The sharp increase in the share of Muslims in this district seems mainly because of their number rising suddenly from 17.7 to 39.8 thousand in Chandil taluk.

In the newly created districts of Khunti and Simdega, the share of Christians has increased considerably, by 1.99 and 2.21 percentage points, respectively. The share of Muslims, on the other hand, has declined considerably in both districts, though the decline is much sharper in Simdega. In addition, the shares of both the ORPs and Hindus have declined in Khunti; in Simdega, the decline in the share of ORPs has been much larger, but that of Hindus has improved by 0.57 percentage points. Thus in these newly created districts, which have the highest share of Christians in the State, Christians have gained at the cost of both Indian Religionists and Muslims.

Thus in different districts, the nature and direction of changes in the proportion of different communities have been quite different. The above analysis seems to underline the fact that the relatively small changes that we see at the district, State or national levels often comprise of fairly substantial changes in the religious demography at the lower levels of the taluk and the village or town. Such substantial and diverse changes, of course, cannot be the consequence of any natural demographic processes. These can only happen as a result of serious contention for demographic space between different communities; which community gains and which loses seems to depend on the peculiar situation of each district and region. Such contention seems to be happening in every part of India. It is perhaps somewhat more intense in Jharkhand. But this contentious situation becoming so visible is probably also the result of Hindus gaining some confidence. The earlier censuses displayed a monotonous trend of decline in the share of Hindus and that largely covered up the actual contention happening at the grass-root levels.
at 11:14